» A Korean student: 'Studying in Vietnam helps me to step out of my comfort zone'

A Korean student: 'Studying in Vietnam helps me to step out of my comfort zone' 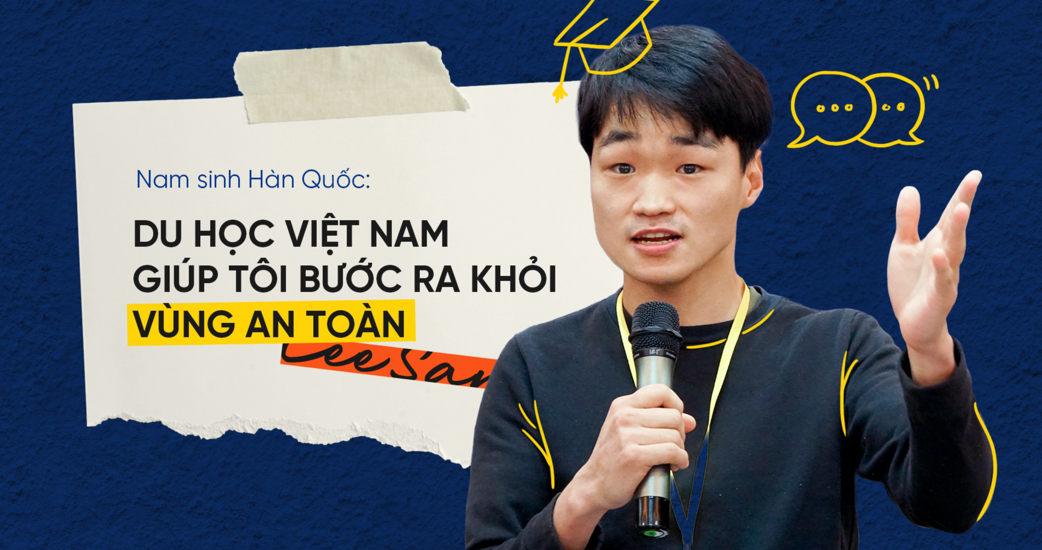 As the oldest student at VNU-IS, Lee San aims to become a financial expert. However, his journey to achieve his dream was not all sunshine and roses.

In 2016, at the age of 20, Lee San graduated from high school in Malaysia and had 2 years of "gap year" in Australia. He was working as a waiter for 100 hours a week at a Korean restaurant. Sometimes in between hours of hard work, Lee San was wondering about his dream and future plan.

Everything would still go on like clockwork every day, if it weren't a time for San to ask his best friend: "Do you think I should stay in Australia to find a job or go to university somewhere else? ".

"Life in Australia is a safe choice while finding new experiences is a risky decision. So what do you want to choose?" San's friend thought for a moment and then answered with a question.

Then, the 20-year-old boy made a decision: Studying abroad in Vietnam - where his brother used to live for a while. For the first time, San stepped out of his comfort zone.

Following in his brother's footsteps, San chose Vietnam National University, Hanoi - International School (VNU-IS) - a learning environment that he considered "ideally". San said that the program here helps him to acquire specialized knowledge in English, while also being able to improve his Vietnamese language with local peers. “In 2008, I used to live in Ho Chi Minh City and once again returned to Vietnam, I realized that this country had developed very quickly, promising great potential in the future. That is why I decided to study in Vietnam to develop myself, as well as learn the language and culture here,” said San.

Like many other foreigners, San is most afraid of riding a motorbike in Vietnam. Looking at the packed lines of people on rush hour routes was enough to make him nervous. But even when he wasn't in traffic, his mind was also filled with other daily worries.

“Language is always a barrier for all foreign students. Even though I chose to study university in English, I am still afraid of the prospect that whenever students don't understand anything, the teachers will switch to Vietnamese language for explanations. But fortunately, that did not happen at VNU-IS. We study 100% in English, foreign students receive enthusiastic support and guidance from teachers and staff."

However, in order to really integrate into the local environment and culture, San decided to learn Vietnamese with "teachers" who were anyone around, from classmates, teachers to officials and employees in the school. He chose to take the more difficult, time-consuming road, but in return he was able to adapt easily to life in Vietnam.

A return full of surprises

Going to college later than his peers, by the time he entered his second year, San returned to his hometown to perform his military service. With friends gradually becoming family and a burning dream to define himself, he always looks forward to one day returning to Vietnam, completing his studies.

Returning to the lecture hall after 2 years, San couldn't help but be surprised: "VNU-IS had only 3 foreign students before, but when I came back there were more than 20 students from many different countries. The number of foreign lecturers has also increased significantly. This change delighted me.”

In recent years, the number of students at VNU-IS has tripled, and the number of foreign lecturers has also increased by 30%. In addition, most Vietnamese teachers are trained abroad, which helps improve the teaching quality to come closer to international standards.

The curriculum is also continuously updated with the participation of consultants from businesses and industry experts, aiming to meet the realistic demand of the labour industry, helping students to expand their approach. The change in both quantity and quality comes from the unremitting efforts of the executive team of VNU-IS.

San said that in the classroom as well as in life, he or any student is always encouraged to be themselves. In addition to improving the quality of teaching, teachers and staff also organize many activities to help students develop their strengths, without discrimination and stereotypes.

Many extra-curricular activities such as career development orientation, self-discovery, skill enhancement, etc. are also flexibly deployed by the school, in line with students' interests and desires. Every year, VNU-IS renews itself to improve the quality, helping learners to achieve more experiences, as well as to enhance their skills and knowledge.

The “oldest and most annoying” student at VNU-IS

In 2021, 25 years old, studying in his third year, San is automatically in the top "oldest" student at VNU-IS. The Korean boy is also famous in school thanks to his remarkable achievements: Being the founder and the 1st president of the International Student Club, a Korean KTV reporter in Vietnam, studied 16 subjects in a semester, achieved GPA of 3.6/4, and was accepted to work at a Korean urban infrastructure development company.

Despite all appraisals he received, San admits he does not have any secret to success, it is simply the path he wants and must go.

San confided: “Many people think that I have to work very hard to accomplish many things at the same time. But to be honest, I don't find it difficult, because around me there are many people who believe, support and motivate me. They tell me that I can do everything that I want to." 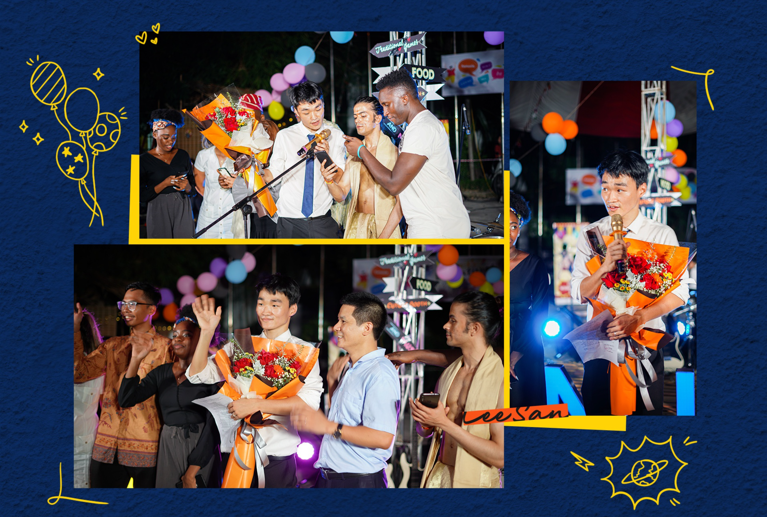 In addition to the knowledge accumulated in the classroom, San believes that what every student should keep in mind are: Hard working attitude, consistent effort, teamwork and presentation skills.

Although he admits that he is not the smart or hard-working type, the 25-year-old student is still impressed by many teachers and staff of VNU-IS because of his enthusiastic personality that is even called "annoying". Three years ago, when entered school, he still showed a hot temper as he wanted all problems to be solved immediately and often let his emotions overwhelm him.

But after years of experience, learning and working with the teachers and staff of VNU-IS, San became more calm and mature. Every time a problem arises, he will carefully consider it, find a clear presentation and solution before knocking on the door of the school's office to discuss with the teacher. Knowing how to regulate emotions, open-mindedness and market-oriented are the things that San learned after 3 years. 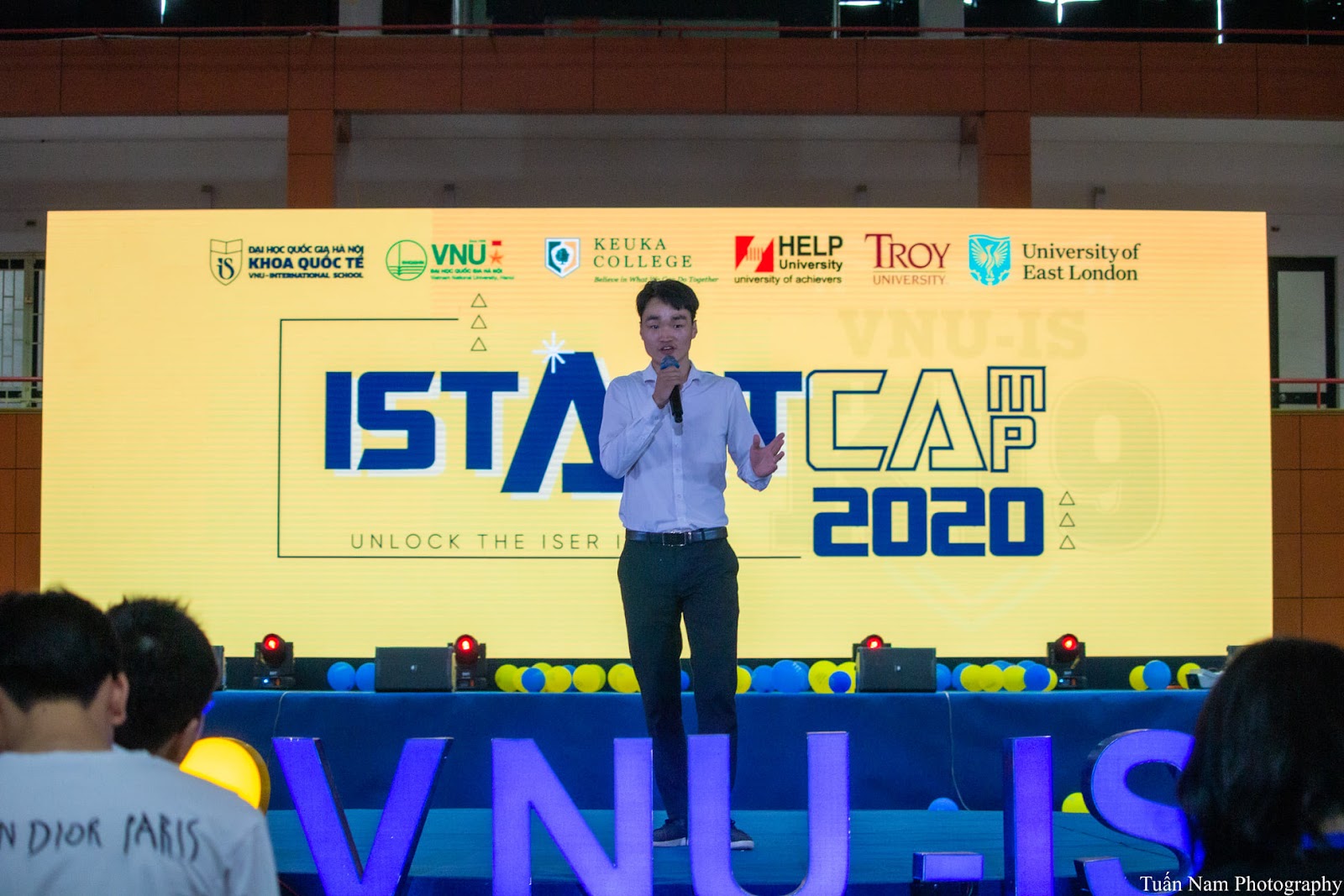 At VNU-IS, all functional offices and departments or even the Dean’s doors are always open, welcoming students to exchange and share at any time. Taking advantage of that, San boldly came to voice his opinion and mind when there were any problems. One day he sat and shared for more than 3 hours with the Office of Student Affairs, presented and discussed ways to reduce difficulties that international students were facing.

"Many international students are still afraid to speak up because they think they are just the minority and have to accept disadvantages compared to local students. I do not mind what people think, I just feel like I need to speak up for other international students. For example, in times of difficulties when applying for a visa, doing an internship or writing a thesis, I will ask people to collect information and suggest solutions,” he said.

From worrying about how Vietnamese and foreign students can connect with each other, San rekindled the idea of ​​​​establishing an international student club - where everyone shares and learns about cultural diversity, thereby connecting and raising awareness about respecting the difference inside everyone. 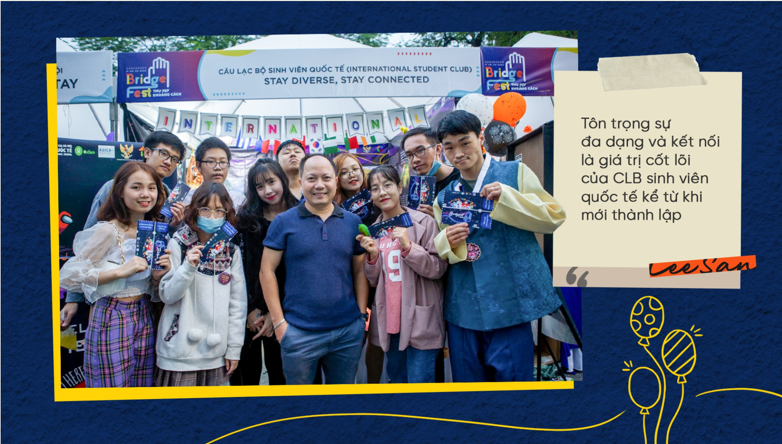 “I received great support from the staff of the university during both my study and life. The staff were very helpful and supportive when I was determined to establish the club. I remembered sitting together until late at night with the teachers to discuss from orientation and development strategy to designing logos or writing reports. They also helped and encouraged me to present my ideas in Vietnamese to attract a large number of students to participate. 'Respect for diversity and connectivity' has been the core value of the International Student Club since its inception. The club is more than 1 year old, gradually creating closeness and intimacy between Vietnamese and international students, "said San.

The key to future dream

At the end of the 3rd year, San was offered a job at a foreign infrastructure and urban development company in Vietnam. The lessons in 3 years at VNU-IS became valuable knowledge that helped him prove his ability to employers. “I learned specialized knowledge related to international business in English and also learned Vietnamese from the surrounding environment. After going to work, I realized that my choice was the right one. The current company offered me a job because I can fluently use both Korean, English and Vietnamese. Also thanks to the Business Culture course in the university program, I learned how to communicate with colleagues or people in higher positions, and know how to convince others to accept my point of view,” he said. After 5 years, from a vague guy who doesn't know what his dream is, San now wants to become a financial expert and has more years of experience in the working environment in Vietnam.

“Vietnam is developing very fast and integrating deeply, I hope to be able to learn a lot in the future. I want to tell international students that 'don't be afraid' if you plan to study abroad, especially if you want to study at VNU-IS. Everyone here wholeheartedly supports foreign students. Many teachers have studied abroad and understand the difficulties of studying abroad, so they pay great attention to international students. Studying here, stepping out of your comfort zone will be the most interesting and meaningful experiences that you don't want to miss in your life," concluded by the "most annoying" student - Lee San.